Ten years and, literally, everything has changed. But, before we get to that, here is how quickly 31 years can pass:

Part 2: What is Hosting?

The only problem that came out of my trip to China was what to do with the information. How could I help these children long-term? I could not ignore what I had just experienced; God made sure of that. I could still hear the little blind boy who sang us a song in the courtyard. I could still hear myself the day they asked someone to sing a song for the children and the words, “Shout to the Lord all the earth let us sing,” came pouring from my mouth. I could still see the 12-year-old sitting beside me making rings for our fingers out of weeds and grass. I could still see the 3-year-old with club feet watching everyone else play because she could not get up and walk on her own. I had enough sights and sounds to make it impossible to move forward with life unchanged.

I knew if everyone else could experience some time with these amazing kids, they wouldn’t be stuck in orphanages forever. Alas, everyone can’t go to China for two weeks. So, could these children come to America? What a ridiculous notion, right? How do we solve problems in the 21st century? We google them, of course. This ridiculous notion existed and had a name — orphan hosting. Children from orphanages in other countries, not China at that time, were coming to the USA for a few weeks at a time.

In December 2006, I first saw orphan hosting on United States soil. I still remember the faces of children here for the first time and hearing several languages swirling around me all at once. God was answering my question of how to help overseas orphans. With that, my (perceived) little stint of mission work to orphans began in 2006. 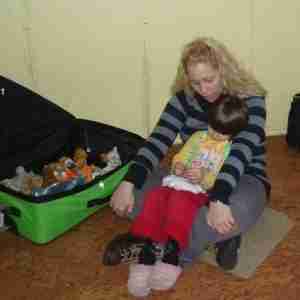 Once upon a time, I circled a sentence in a Bible study book that said, “Break my heart for what breaks yours.” I wasn’t at all prepared for God’s response. This photo is a moment inside an orphanage that God used to change me forever. It just happened to be captured on film.

On this particular day, a girl, who looked to be about 10 or 11, came and sat down on the floor near my chair. I vaguely remember humming a song and she took notice of that and started inching her way closer and closer until she was within my reach. I started rubbing her head, just sort of playing with her hair a bit, and continued humming. Next thing I know, she wants in my lap. So, I just hold her, rock her, continue to hum, stroke her head and rub her back. She tries to hum and plays with that little doll, all the while, sitting happily in my lap.

Satisfied with the translator’s explanation, she simply placed her head on my shoulder. I was wrecked. With a click of a camera from across the room, that moment was captured. I could not fathom how a child could exist for a decade and need to ask such a question. There would be many more hard questions, including, “Can I come to your house?” and “Are you my new mom?” Of course, there are lighter moments and more amusing questions like, “Why are your eyes so big?” That one usually only occurs in China. 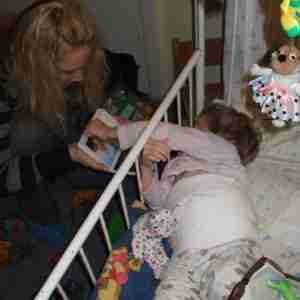 No one is more surprised than me to still be part of this mission field of orphan ministry and orphan hosting 10 years later. Before you think such a journey is always a positive and affirming one, when you travel overseas repeatedly into dozens of orphanages and establish relationships with hundreds of kids, you also experience some of the lowest lows. Remember the beginning when I mentioned being safe and loved for my first 18 years of life? Because of that, I am able to make life adjustments, problem solve, examine relationships and heal from emotional wounds more readily. Virtually all the children I encounter weren’t given such a childhood. Because of that, many make choices out of brokenness instead of wholeness. I’d never encountered suicide or feared for children being recruited for trafficking or becoming homeless or even realized the true merit of a basic education before I personally worked with older and special needs orphans. Both the highs and the lows of ministry are teachable moments and I am a perpetual student.

Ten years later and I still believe wholeheartedly in the miracle of orphan hosting for older and special needs children. I’ve seen thousands of children make their way out of the shadows of an institution and into forever families.

I’d like to encourage you to take a step. Don’t wait until you feel ready, don’t question the impact of your presence, don’t question your sanity, don’t be stingy, don’t rank the effectiveness of one thing over another and, no matter what, don’t give up. But, do give. Give freely of your time, give love knowing there is no guarantee it will be reciprocated by the wounded and injured and give sacrificially because there really is no other way to experience God’s full measure of provision. A decade later and I would not have the relationship with the Lord that I do without an amazing, persevering group of children labeled ‘orphans.’ Whatever passion the Lord is planting in you, accept it with your whole heart and follow after Him in obedience. Carry all the courage you can muster and offer it wholeheartedly to the One who is shaping the desires of your heart.