When I think about what you need to know to host a special needs child, I want to start with the fact that I had exactly zero experience hosting a special needs child. In fact, I think our home was setup about as inefficiently as possible for a child who used a walker. We had stairs to the bedrooms, stairs to the basement, stairs to the garage and more stairs off the front and back porch. When I got the call that a 7 year old little girl needed a backup family, I was convinced it would not be ours. Not only was I not experienced with special needs, I wasn’t even very experienced as a mom. I spent two days calling everyone I knew who I felt would be better prepared, more equipped and not nearly as clueless as myself. After not getting a single commitment, we found ourselves becoming the backup family for the little 7-year old girl with Cerebral Palsy. To say this was new territory would be a complete understatement. But, as the old saying goes, “He doesn’t call the equipped, He equips the called.”

Getting to know her was humbling; it forced me to slow down. While hosting a child with Cerebral Palsy there was no choice but to be engaged and observant of almost every detail of her daily life. She needed me to be available to help her navigate any physical limitations. We became a team pretty quickly and relied on one another to maneuver this new territory; her in a family for the first time and me discovering how to help a child with a physical disability. Having never been allowed to attend school, I took her to our church preschool one morning to observe her interaction with the other children. To my surprise, she was engaged and attentive and after copying the letters a few times, learned to spell her name that morning. A few days later, I would take her to a physician who would help me understand her condition better and what the future would look like for her. I wanted to do anything that would prepare me to speak on her behalf. Honestly, I’ve never fought so hard for a child.

Just thinking about that time with her brings me to tears. She literally had no advocate. This beautiful child had no one dedicated to seeing her move out of the orphanage and into a family. I wrote tons of emails and attached her photos to everyone in my address book. Then, I asked those people to please forward to everyone in their address book. I contacted the news and a reporter showed up at my house to film a story about her. A local photographer heard her story and invited me to bring her in for some professional photos, which are still displayed in my house to this day. I was dedicated to connecting her with a family because I couldn’t imagine her living out her days in an orphanage. It turns out, that’s exactly what she needed – someone dedicated to be her voice. By the end of hosting, after talking to what felt like half the state of Georgia, she had a family committed to giving her a forever home. 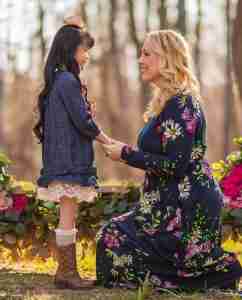 sounds cliche to say she changed my life, but she really did, along with the lives of many other special needs orphans and families who would come behind her. This little girl gave me the courage to step further into the world of special needs. A few years later, I would open a new extension of our host program specifically for children with special needs. My goal was simple, for these children to move from a being a file on someone’s desk to a beloved son or daughter. As host families stepped forward, they all came to the same realization – their host child was facing some challenges, yes, but he or she was also kind, loving, intelligent, persistent, strong, radiant, worthy of love, family and a future outside orphanage walls. Many of those same children are flourishing in their own families today, including one who became my daughter a few years ago. Committing to my daughter felt like a full circle moment for me and I will be forever grateful to the little girl who first opened my eyes and spurred me to action for other special needs orphans. (Michelle Vernon)

We asked veteran Project 143 families, who hosted special needs children in the past, what advice they would give to those of you considering hosting a child with special needs.

Here’s what they had to say:

Kids are just kids and 99 times out of 100 just want to have fun with your family. Each child with a disability has already learned to cope and live with their disability. Plan to treat them as you would any other child, accepting them where they are and be ready to learn so much from them. We hosted a child with Cerebral Palsy that affected all four limbs but it didn’t affect her personality at all. She is now our daughter.

You may be able to handle more than you think. I remember looking at the list and immediately ruled out children in wheelchairs because our house was not wheelchair friendly. A few years later, the child we hosted and later adopted had knee surgery and was in a wheelchair for a short time. With that, we figured out the dynamics because we had to. One day, as I was adjusting the wheelchair it hit me that we COULD have hosted a child in a wheelchair. We could have made it work if only we had more of a “can do” attitude. Our daughter figures out a way to do things in spite of her physical challenges and she teaches us so much! We did end up being able to handle more than we thought we could. See the child, not the challenge. Focus on the things they are able to do and not the things they can’t. Uncover ways the child can be most helped going forward.

A special need on paper is a lot different than a special need in person. In person, you see the sweetness, innocence, personality, strength and the love of life. Then, the special need becomes secondary.

Once my little boy arrived, I just wanted to love and protect him as if he was my own. I focused on providing a comfortable, loving experience for him.

Being ready for the unexpected can bring unexpected happiness and touches your heart in completely new way. All kids need love and a family, regardless of their needs.

Project 143 remains committed to helping all orphaned children, both those who are physically healthy and those living life with a special medical need. If you want to know more about what’s involved, take a look at the children available for hosting in the upcoming season in our photolisting – www.p143.org/pre-registration/