How a Desire to Serve Led Us to Lightning Bugs 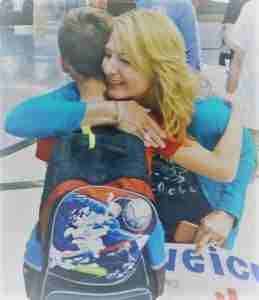 We didn’t feel anything was missing.

We did, however, have a desire to serve more. I prayed and wondered how our little family could serve together. One night while I was cooking, I could hear a news story in the background about a family who hosted a sibling group. I had never heard of orphan hosting. The whole thing tugged at my heart and I could not stop thinking about it. Later that night, I searched the internet and came across Project 143. I spent hours reading but then closed the computer in defeat. I began telling the Lord all of the reasons why we could not host; cost, travel to and from the airport several states away, how this may affect my biological child, my list continued. I wrestled with God several more days until I sensed Him respond with, “you won’t have to do it alone.” Several more months passed before I approached my husband. I fully expected he would confirm all of my doubts and fears but to my surprise he said, “yes, but we are not adopting.” My hands were shaking as I clicked the bright red “register to see the kids” button on the Project 143 website. While reading the profiles of so many amazing kids, the reality of their situation began to really sink in.

"It was heart breaking to know our decision would impact only one and so many others would go unchosen."

As we continued reading about each child, we felt drawn to an 11 year old boy who loved to fish. We believed wholeheartedly he was the child our family should host. Later, we learned he really desired a permanent family. As we were not an adoption minded family, we stepped aside to allow him to be ‘found’ by such a family and continued praying for him. We read through more profiles of other waiting children and I nervously checked the website every day to see if our little 11 year old had been chosen and moved to the ‘hosted’ section. After no other families stepped forward, he was still waiting. We could not get this boy who loved to fish off our minds, committed to hosting him and the countdown and fundraising to bring him home for summer hosting began. The night he arrived in the Atlanta airport was surreal and one we will never forget. This brave child flew half-way around the world to strangers, holding onto the hope of his own family one day.

The first few days home were a whirlwind; he was so excited to try everything. He and my son played basketball, baseball, soccer, frisbee, rode bikes, swam, had Nerf wars, chased the dog, raced cars, played XBox, and fished until they crashed in exhaustion each night. So, to answer the question as to what kind of impact orphan hosting would have on my biological child? The impact of a lifetime! He learned what it meant to share his parents, his bedroom, his friends, and his belongings. He learned what it meant to sacrifice for the good of others, he learned what it meant to serve someone and expect nothing in return and he learned what it meant to love unconditionally. Two weeks into hosting, we were outside catching lightning bugs. The sun was setting on a perfect summer day and I remember watching our host son laughing and running around the yard with his jar of glowing bugs. I was overcome with a flood of emotions and filled with so much love for this little boy. There was no denying it.

The end of hosting came quicker than any of us wanted. Thankfully, we haven't gotten to the end of his story, the last page hasn't been written just yet. Almost two years later, we are headed overseas to become that little boy’s forever family. We simply cannot imagine life without him. God’s plans are truly bigger and better than our own. We would have missed out if we had not trusted Him with our unanswered questions. Because we said yes to ONE, we have witnessed miracles and mountains being moved – a reminder of God saying, “you won’t have to do this alone.”

P143 thanks the Hurt Family (KY) for sharing their heart for international orphan hosting!